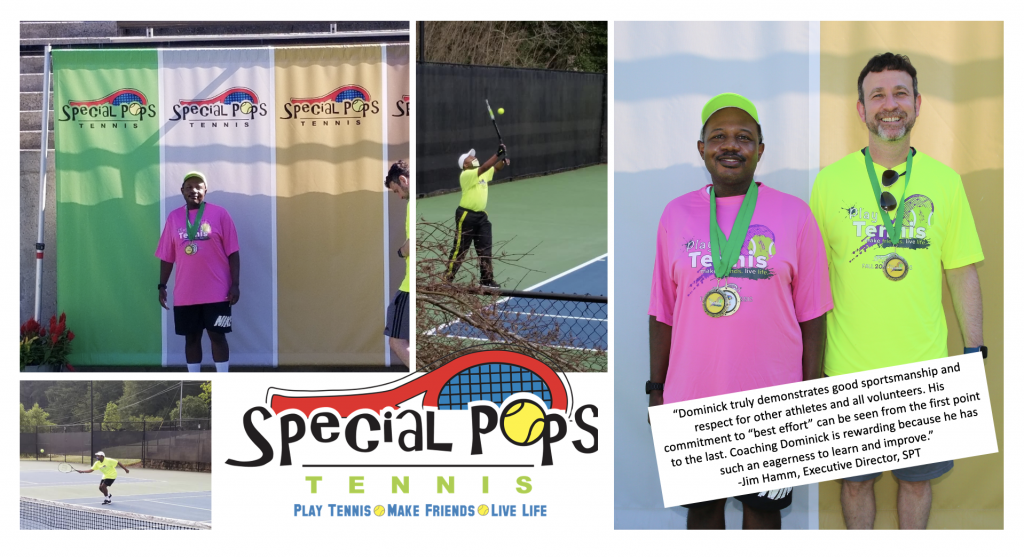 This month’s SPT Athlete Feature is Dominick. He has been playing with SPT for 15 years! When asked what his favorite part of Special Pops Tennis is he said,

His favorite memories from SPT have been traveling to and participating in tournaments in Hilton Head, Dothan, Montgomery, Belton, and the Special Olympic Summer Games. Out of all of his travels, his favorite tournament is definitely the Fall Classic! Outside of tennis he enjoys playing softball, basketball, and bowling. Dominick has also worked restocking the Emergency Room (ER) at Northside Hospital in Lawrenceville for 15 years! We asked Dominick if he would recommend SPT to others and he said,

“Obviously YES! It’s a lot of fun and a lot of great people!”

He’s also very competitive and loves to win. He really enjoys volleying at the net! In the future, Dominick said he would like to be able to serve aces on the tennis court and if he could play tennis with anyone in the world, he would pick Rodger Federer.

We asked Dominick’s parents about their experience with SPT and here’s what they had to say, Ida (mom)- “I like to watch Dominick play singles because it’s one-on-one so it showcases his skill. Even though someone has to lose its great to see good sportsmanship and it’s fun to see when the athletes get good rallies going.”

We also love the volunteers who are so encouraging and caring. They are so genuine supporting the athletes.”

“We really like the socialization with the other athletes and volunteers. It’s been great to travel or have other athletes come in town to get to know them. It’s always great to see the participation from all around the country.”

“Dominick truly demonstrates good sportsmanship and respect for other athletes and all volunteers. His commitment to “best effort” can be seen from the first point to the last. Coaching Dominick is rewarding because he has such an eagerness to learn and improve.”