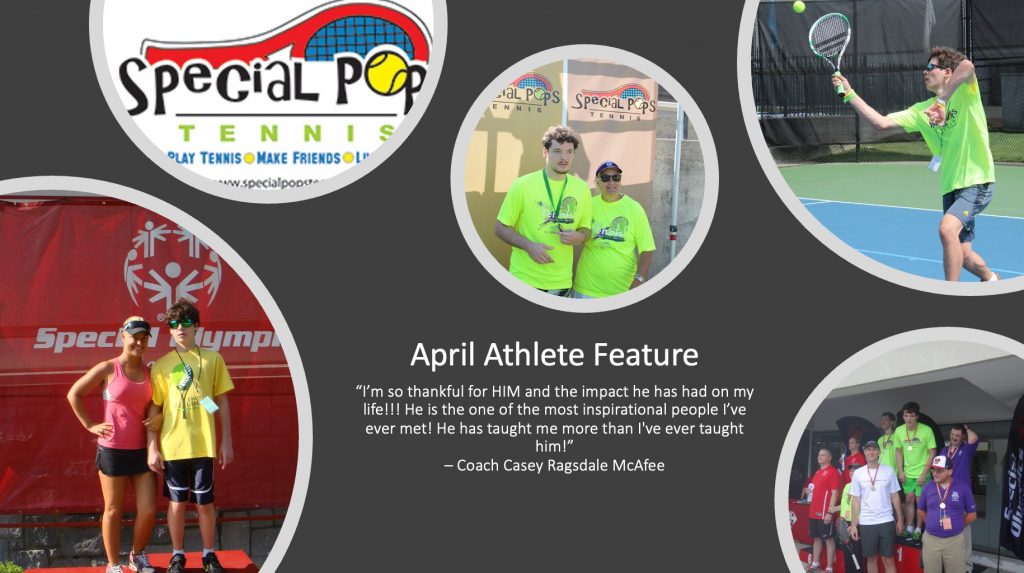 This month’s SPT Athlete Feature is Ryan. He has been playing tennis with Special Pops since 2011! When asked what his favorite part of SPT is, Ryan had this to said that he loves to get the gold medal. He recently won a very exciting match that went all the way to the last point of a tie breaker! Ryan didn’t have a favorite memory from SPT because he just loves playing tennis!

Besides tennis, Ryan also enjoys bowling and shooting hoops in the driveway. He is a big movie buff and also loves music! His favorite song is “We’re the Titans” from Hercules and Xena. He also enjoys playing board games. Something really neat about Ryan is he loves snowboarding! His father takes him to Telluride, Colorado where he participates in an adaptive snowboarding program. In the future, Ryan would like to continue practicing so that he can get better at tennis and snowboarding.

When asked if he could play tennis with anyone in the world Ryan picked Casey Ragsdale McAfee. Casey is his tennis coach that has worked with him since he was ten years old. He works with Casey every week and he always has fun in her lessons.

Ryan’s mom is also a volunteer with SPT so we asked what her favorite part of SPT was:
“It is really amazing to see new athletes who at the first practice struggle to track the ball and then by the last practice are able to hit it over the net. It is amazing to witness the progress of the athletes!”

She also said that special pops tennis has helped Ryan stay active and has given him an opportunity to socially engage and interact with the other athletes. It also helps Ryan feel successful at something!

Coach Casey’s Quote: “I have taught Ryan almost every Sunday for going on 14 years!! I’m so proud of him and all his accomplishments! To see how far he has come on and off the court, is truly incredible!! Ryan’s family has always been so thankful for me, because of the impact I’ve had on his life. However, I’m so thankful for HIM and the impact he has had on my life!!! He is the one of the most inspirational people I’ve ever met! He has taught me more than I’ve ever taught him!”