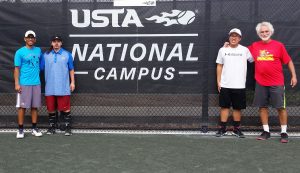 Anthony, Charlie, Nate and I were honored to be able to participate in the inaugural national championship tournament.  We had the opportunity to play against and meet athletes and partners from across the country.  Several of the athletes had previously played at our Fall Classic or played in Virginia tournament with some of our players.

The USTA facility in Lake Nona (a suburb of Orlando) is magnificent with 100 courts: clay, plexicushion (hard) and small courts for beginners.  The University of Central Florida plays on twelve courts built to allow 6 singles matches to be played simultaneously.  The only drawback is the courts are in the landing pattern for the Orlando airport.  So, on certain courts, you must make sure your ball toss for a serve or your lobs do not hit the incoming planes.  Actually, planes do not fly that low but they do get your attention.

Rain on Saturday forced us to play on indoor courts and time limit on matches was reduced to 20 minutes.  Luckily, Sunday was a beautiful day so we played on clay courts with regular 30 minute time.  We played no-add scoring with only completed games counting.  Twice it was my serve when 2 minute warning was given so my instruction to Anthony was “hurry, hurry, hurry.”  We completed both games in under 2 minutes, winning one and losing ones.  Other teams picked up my ‘hurry, hurry, hurry”  cheer.

The structure was the to group 16 teams in 4 groups of 4 for round robin.  Based on games won, the first place teams on Saturday were placed in same group to play for a top spot on Sunday.  In addition, the second place, third place and fourth place teams were grouped, respectively.  Anthony and I were in second place group, tying for 5th place overall.  Charlie and Nate were in third place group, tying for 9th place.  Only top four teams received trophies which, for us, was a good thing because of extra shirts and welcome package we received, none of us had room in luggage for a trophy.

I had told our guys that since this was first time for this tournament, we would be guinea pigs.  In a way it was a good thing to have the rain issue because the tournament organizers now have the experience of dealing with inclement weather.

We had a great time and Nate and I were proud of how Anthony and Charlie interacted with their fellow athletes.  In fact, I think all of us, including even me, did Special Pops proud. 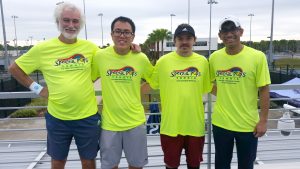 I hope other Special Pops athletes and partners will get to have the chance to enjoy this tournament.